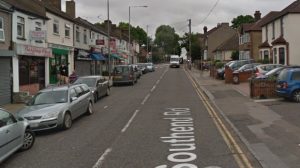 ESSEX Police has seized over 500 cannabis plants in Grays following an incident where a vehicle collided with a building today, Wednesday 14 August.

A spokesperson said: “We were called at around 4.15am with reports that a vehicle had collided with a building in Southend Road.

“We received information that three men got out of the car and entered the building before running off.

We attended and searched the area without success. We believe they climbed into nearby gardens to escape.

The first suspect has been described as being white, 6ft 1ins, aged in his late 20s to early 30s, had short blond hair and wore a Parker coat and white woolly hat.

The second suspect has been described as being Asian and wore a flowery orange shirt and black jeans.

The third suspect has been described as being white, 5ft 8ins and aged in his late 20s to early 30s. He had short blonde hair and a beard.

Anyone with information is asked to call Grays Local Policing Team quoting incident 132 of 14/08 or Crimestoppers anonymously on 0800 555 111.