REMEMBER World War II’ a free exhibition researched and presented by Thurrock Museum Volunteers will be in the ground floor exhibition space of the Thameside Complex from Monday 2 September to Friday 20 September (closing at 11am on 20 September).

This exhibition commemorates the 80th anniversary of the outbreak of war and features Thurrock memories. Neville Chamberlain, the Prime Minister, announced the declaration of war on 3rd September 1939 and this exhibition is the first in a series which will commemorate major events and recognise the home front. 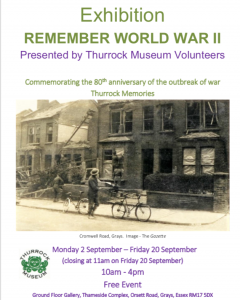 The exhibition features 40 living memories and family contributions from Thurrock. Some of the memories are from people who were children at the time and recall air raids, collecting shrapnel and rationing. Many children were evacuated from Thurrock, mostly with their schools, and experienced vastly different lifestyles while they were away.

At home a strong theme is air raids and bomb damage, in the towns and along the river. Other contributions cover the armed forces, the men who went away to war, and people at home who volunteered in the civil defence. Thurrock people were at the D-Day landings, the invasion of Italy and on artic convoys amongst other theatres of war. Every memory and contribution has a local connection. Images on display come from personal collections, Thurrock Museum archives and the Gazette.