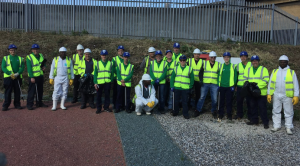 Each of the group’s 13 nationwide locations, including the Erith and Purfleet PDSIS sites, participated in a range of green-themed activities such as beach clean-ups, car-sharing and creating planters from old hard hats.

The initiative was the idea of the Group’s Environmental Champions, who are responsible for ensuring PD Ports continue to improve their commitment to sustainability throughout the business.

The firm’s chief executive Frans Calje said: “It’s vitally important for us to raise awareness of green issues and to actively get involved in preserving our environment for future generations.”

Located close to one of the UK’s major shipping routes, PDSIS Erith and Purfleet support customers using the Thames Estuary, as well as those across the UK and Europe, by offering expertise commodity cargo inspection, jetty managements an ships agency.

The team at the ADM Erith site worked together on their Green Day to clean the area around the site to create a more pleasant space for staff.

Two skips of rubbish were collected from around the area and both the Erith and Purfleet branches have been decorated with plant beds and hanging baskets.

In Purfleet, volunteers were split into four groups to tackle areas brought to attention by staff. An estimated 100 bags of rubbish were collected that included weeds, litter and heavy-duty items like pipes and metalwork.

Mr. Calje added: “Making a positive contribution to the communities in which we operate is fundamental to the way we do business.

“The activities that took place will benefit the wider community, which and this is hugely important to our philosophy and makes us who we are.

“The turnout across the business was hugely impressive and helped to not only raise environmental awareness but encourage teamwork and boost morale.”

PD Ports is hoping to incorporate regular ‘green’ activities for the sites at Purfleet and Erith, including planting wildflowers, hanging feeders and building a bug hotel, as well as using more sustainable methods of transport such as cycling.

To find out more about PDSIS, visit the PD Ports website.