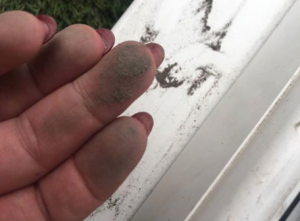 DUST that has been plaguing the residents of Tilbury for years does contain hazardous material but there is no evidence it is harmful to health, independent testing has revealed.

Members of the Thurrock Independents worked with MLM Consulting Engineers to undertake tests on the dust which is widely believed to have come from operations at Tilbury Docks and has sparked fears that long-term exposure will impact the health of residents.

Over five weeks in July, MLM ran tests on the dust in five locations and found evidence of a number of different materials including arsenic, cadmium, chromium, copper and lead.

According to the World Health Organisation, long-term expose to arsenic has been linked to several forms of cancer as well as cardiovascular disease.

Chromium can also result in skin irritation, as well as respiratory problems.

However, the company has noted in their results: “There is no evidence to suggest that the ambient air or dust deposited on surfaces at monitoring locations contain significant quantities of potentially harmful contaminants.”

The level of arsenic was so low that it was deemed to be “below the Limit of Detection”, meaning that the amount detected was at the lowest level it could possibly to be for it to be found. The level of chromium was also found to be “significantly” low and “not likely to pose and unacceptable risk to human health”.

Tilbury Councillor Allen Mayes said: “The results show that the dust does contain materials that are harmful to people’s health.

“Although the testing has revealed that materials are below the ‘acceptable limit’, I would argue that prolonged exposure to such materials in your lungs will be detrimental to people’s health.

“The people of Tilbury are breathing this in every single day. That is not acceptable to me and we must now see action.

“Authorities simply hoping that this will not have an impact on people’s health in the long term is not acceptable. Any dust entering people’s lungs is detrimental to health and this test reveals some pretty nasty materials are present within the dust itself.”

Councillor John Allen added: “I feel that the Port of Tilbury needs to do everything in their power to regulate its emissions into the atmosphere and minimise the pollution of the air we residents breathe.

“Surely prolonged periods of ingesting such materials into our lungs would have a detrimental affect and be harmful to local people including our children’s health as there are a number of schools in close proximity.”