THE THURROCK Independents have expressed their anger as the Tory-led Thurrock Council continue to push for £10 million to be spent on a new council office in Grays. 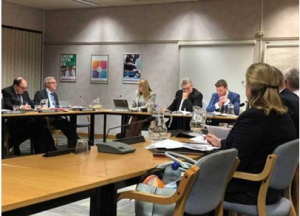 “We don’t think Thurrock Council has ever seen such woeful political leadership.

‘….the new building should instil civic pride and should set the tone for future development in the Town Centre’

“I’ve not spoken to a single resident who has seen the plans who is now brimming with a sense of ‘civic pride’. In fact, the reaction of residents is exactly the opposite. Residents are angry that their Council is willing to fritter away such large sums on an ‘ivory tower’.

“The report justifies the spend by stating that the eventual costs will be lower than the £7.2 million required for a ‘full refurb’. However, this justification relies on the nonsense that the current building requires anywhere close to a ‘full refurb’.

“Furthermore, the income figures the Council are stating they will gain from the investment into new offices are fanciful at best.

Lastly, as always with this Council, any build is likely to result in a significant overspend above the quoted £10 million.

No Cabinet, in their right mind, would approve these plans. Sadly our Tory Cabinet appears to have given leave of their senses.”