The decision to press on with the controversial project was made during a cabinet meeting on Wednesday after opposition councillors had voted to scrap the project and the council’s planning committee had refused planning permission. 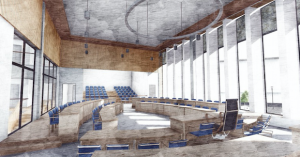 Councillor Mark Coxshall, who oversees regeneration in the borough, explained that assessments by council officers have shown that rebuilding the offices would be £1.2million cheaper than refurbishing and the project would be significant benefits, including kick-starting the regeneration of Grays.

“It is always the same in my experience that refurbishing a building is much more difficult than building a fresh one,” he said.

“On top of that, we’ve got 80-plus new homes we are going to build on this site, not on green belt, which is exactly what we want to see in the local plan, density in the town centre.

“It is also part of our promise to the private sector to invest in Grays, we are putting our money where our mouth is.”

He went on to claim that Thurrock MP Jackie Doyle-Price had successfully campaigned for up to £43million of Government investment in Grays and suggested some of that money could be used on the civic office project to “allay some of the concerns that councillors have raised”.

He did not provide any detail on this investment or when the council would be receiving it. The council has also not responded to a request for more information.

It comes just days after Grays and Tilbury were selected by the Government to receive £25million each as part of the Future High Street Fund and in addition to £11million awarded through the Local Growth Fund.

Council leader Rob Gledhill also gave his support to the civic office project, claiming that the plans had been circulating for years but previous administrations had stopped short of going ahead with them.

“It just seems that whenever we can get to the point when we are getting to do something for our borough’s capital, we don’t,” he said.

“How on earth can we expect developers to deliver high quality designs if we cannot lead by example by putting our money where our mouth is and delivering this project?

“It will bring more business and employment opportunities in Grays which is stuck in a time warp from the 80s and 90s and has no night-time economy.”

The project will be discussed by the planning committee for a second time on Thursday and council officers have recommended that councillors grant planning permission.