LABOUR’S parliamentary candidate for Thurrock has criticised his political rival – sitting Tory MP Jackie Doyle-Price – after hearing of government plans for new hospitals across the country. 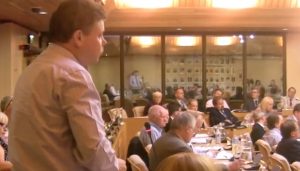 Thurrock has escaped any mention in the plans which John Kent says is because of her sycophantic attitude to government, health and the well-being of her party rather than the borough residents.

He contrasts her support for the closure of aging Orsett Hospital with that of fellow Tory MP Robert Halfon who had been an ardent campaigner for local health services in his Harlow constituency and his work has been rewarded with news that town’s Princess Alexandra Trust will receive money to replace their existing hospital from 2020 to 2025.

This could be a re-build on the existing estate or a completely new hospital on a new green field site in east Harlow, around three miles from its current site.

Mr Halfon says: ““I am absolutely thrilled this day has come. I have worked hard with so many wonderful, passionate people on this campaign. For the rest of my life, I know that I will have played a major part in getting a new hospital for our town. I could not be happier.”

He says: “If there was ever an opportunity to show what Jackie Doyle-Price hasn’t done for Thurrock, this is it. On one hand we have a local MP who campaigns hard, aggressively and respects the wishes of his community – in Jackie Doyle-Price we have an MP who puts herself and her party first, borough residents last and leaves Orsett Hospital a long way behind that.

“When I am elected to represent Thurrock I will always put Thurrock first – fighting for better services will be at the heart of my workload.

I will go out and fight for borough residents and improve their lot, not strip away local assets by being a weak-willed sycophant supporting the destruction of much-loved services in our borough.”