A 100-year-old lady who helped to keep Essex safe during World War Two returned to the fire station she first served at last week. 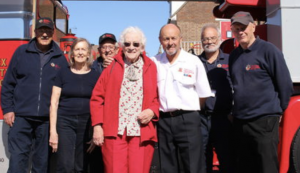 ‘Hocky’ Hockets, who was based at the original fire station in Orsett Road Grays in what was then the National Fire Service, was greeted by family members in a special surprise three days after reaching her 100th birthday.

Hocky, who later married Grays’ first Station Officer Herbert Lazell, turned 21 on the 15 September 1940, which became known as the penultimate day of the Battle of Britain.

Inspired to do something to help and protect other people, she began training as a firewoman (as the National Fire Service described the role then – similar to a control operator) at Hornchurch station, before soon being posted to Grays where she was quickly promoted to Leading Firewoman.

By March 1942, she had been transferred to Stanford-Le-Hope fire station – before intense training at a National Fire Service in Brighton prior to a long-awaited return to Grays. During this period, she undertook short postings at Laindon, Billericay and Wickford NFS fire stations.

Greeted by family members from across the country last week at Grays, Hocky was visibly emotional upon meeting Roger Pickett, who she has come to know for his work as Collections Officer at the Essex Fire Museum, positioned behind Grays fire station.

Roger said: “Hocky is an inspiration to us all – her tale of helping to keep Thurrock and the surrounding areas safe during a time when the country was at war and under immense threat domestically is very special.

“It was a pleasure to welcome Hocky back to Grays, where her life as a firewoman began all those years ago – her passion for the Fire Service that remains to this day, even at 100 years old, is fantastic.”

You can find out about Essex Fire Museum on their Facebook page: facebook.com/EssexFireMuseum