OVER six people a month are putting their lives at risk by walking across the tracks at a level crossing in Grays.

The latest figures from Network Rail show that over the last year*, 74 people have been caught on camera at the crossing on Grays High Road in Grays, Essex. It is estimated hundreds more cross to take a shortcut or to avoid paying their train fare as it is close to the platform. 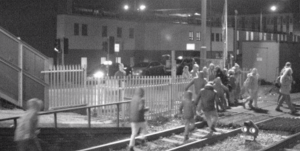 While the majority of people use the crossing safely, a small minority are still persistently ignoring safety measures in and around the crossing and could face prosecution.

Network Rail staff are today (1 October) providing information and advice on the alternatives to cross the road. We have joined forces with the British Transport Police to remind people of the dangers of crossing the track in an attempt to reduce the number of incidents.

Rupert Lown, Network Rail’s director of safety for Anglia, said: “The number of incidents shows that people are ignorant to the danger they are putting themselves in when they take a short cut to the station or to avoid paying the train fare.

“Choosing to flout the safety procedures can have life changing consequences for everyone involved, and it’s just not worth the risk.

“We are in Grays to remind people if you trespass at this crossing, not only do you risk your life, you could also face a fine and a criminal record.”

Stephen Webster, inspector at British Transport Police, said: “We are working with Network Rail to reduce offending and risk at Grays.

“We conduct both uniformed and non-uniformed patrols frequently at the crossing and in the last year, 11 people have been identified and processed for offences.

“Trespass is not only dangerous but also carries a penalty of up to £1000. We also collate CCTV images of people trespassing and identify people from a range of sources. Our message is very clear – please use the crossing safely, don’t trespass or you could be getting a tap on your shoulder by one of my officers.”