Football: East Thurrock comeback puts them back in play-off places

THE Rocks travelled south with just 13 players available. Covo welcomed Mitchell Gilbey and Alex Clark back from injury, but then had to go into the game with Andy Pugh, Danny Harris and Morisi Gelashvili all sidelined.

Rocks had the best of the early play, with Ben Marlow, Frankie Merrifield and Clark all going close, but it was Worthing, on a six match unbeaten run who took the lead on 14 minutes when Reece Meekums drilled past Jack Giddens from the edge of the box. 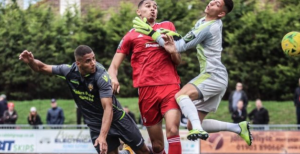 The Rocks equalised after 38 minutes when Merrifield scored with a great header, but Worthing were back in front just before half time when Giddens made a good block to deny Meekums, only for the ball to fall at the feet of Joel Colbran who made no mistake.

Worthing had a couple of good chances early in the second half, but it was the Rocks who scored again on 57 minutes when Merrifield scored his eighth of the season, latching onto a through ball to fire past home keeper Roco Rees to level the scores.

The home side pressed forward in search of a winner, but found the Rocks defence in solid form, dealing comfortably with anything the Mackerel Men could offer.

Then, out of the blue, with five minutes left on the clock, Marlow produced a sublime piece of skill to win the game, controlling the ball on his chest before volleying an unstoppable shot past a stunned Reece.

With no midweek game, John Coventry will be hoping to have a fully fit squad available for Saturday’s home game against Lewes.