A VALENTINE’S Day robber has been jailed for four and-a-half years.

A man in his 30s had left Grays railway station and walked along Church Path at around 8.30pm on 14 February when he was approached from behind and attacked by two men. 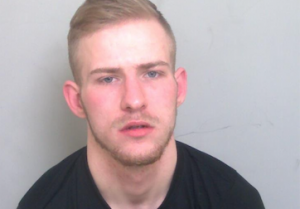 He received a cut to his leg and was punched in the face before being pinned from behind, threatened and had his bag and wallet stolen.

When his attackers made off he gave chase and CCTV subsequently capture the men – one of whom had a meat cleaver – running away.

Our investigation established the men had got into a taxi outside the railway station.

One of the men was dropped at the Post Office in Riverview, Chadwell St Mary.

He was then captured on CCTV going into the store and attempting, but being declined, to make a transaction.

Further enquiries identified that cards stolen from the victim’s wallet were used in a number of shops with transactions totalling more than £370.

Officers viewed these images and he was identified as 23 year-old Nathan McKenzie, of Aluric Close, Chadwell St Mary.

When he was arrested on 7 March officers recovered a knife he had been seen to dispose into a nearby bin.

He admitted the charges and, at Basildon Crown Court today (Thursday 10 October) was sentenced to four and-a-half years in prison.

Investigating officer PC Paul Lamb, from Grays CID, said: “Nathan McKenzie is a dangerous offender who appears to have few concerns about threatening violence to get what he wants.

“He carried out a litany of offences including carrying weapons in a very public place.

“This is simply not acceptable.

“Diligent work by our officers led to him being identified and he now faces significant time behind bars.

“Essex will no doubt be a safer place with him in prison and I hope he takes the opportunity to reflect on his actions.”