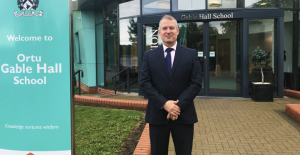 A spokesperson said: “A key message which emerged from the proceedings, was the strong support that he had received from the parent body of Ortu Gable Hall School in his drive for excellence and we would like to thank you for that support.

“As you must already know, Mr Evans is determined for every child at Ortu Gable Hall School to achieve their best and his commitment to working closely with his staff, you as parents and our community sets him fair for the bright future ahead”.