A DRUG dealer caught with 23 bags of cannabis and 16 wraps of the Class A drug cocaine has been jailed for three years. 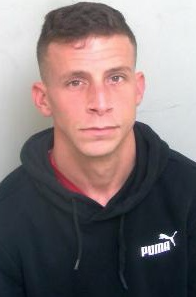 Basildon Crown Court heard how officers from the West Operation Raptor team were patrolling in Bradbourne Road, Grays on January 29 this year when they stopped a BMW that was uninsured.

Officers searched the car, which was driven by 31-year-old Harry Moore and found two mobile phones which contained evidence linking him to the supply of drugs.

Under the front passenger seat the officers found a black bag containing 23 bags of the Class B drug cannabis weighing a total of more than 46grams and 16 wraps of the Class A drug cocaine weighing more than three grams. A drug dealing ‘tick list’ with the names of customers and amounts of money they owed was also discovered.

He was jailed for three years at Basildon Crown Court.

Following the sentencing Sgt Scott Fitzmaurice of the West Operation Raptor team said: “Moore tried to deny that the holdall containing the drugs belonged to him.
“But it was clear from the evidence we found on his phones that he was involved in the supply of both Class A and B drugs.
“We will continue to proactively target the people who think they can deal drugs on the streets of our county.
“As we have demonstrated time and again, Operation Raptor will be waiting for you, we will arrest you and we will put you behind bars.”

Moore was sentenced at Basildon Crown Court on Friday 11 October.