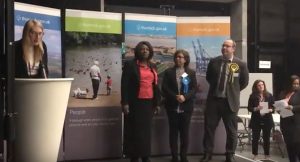 AT Wednesday’s council meeting Tilbury Labour councillor Bukky Okunade called on the Tories to stop raising false hopes on the government’s £25m grant to Tilbury and how it will be used.

“It is great news that we have been given this opportunity – although it was clear last night the Tories have no idea yet what to do with it”, said Cllr Okunade. “But let’s be clear, the grant is for transport and broadband connectivity, and there are likely to be strict conditions on how it is used. It’s misleading for the Tories to tell local people ‘It’s ours to do what we like with it’.”

7 Responses to "Labour councillor calls for clarity on Tilbury £25m"