THURROCK Council has been formally notified of the upcoming general election as the Mayor received the election writ sent by the Clerk of the Crown of the Chancery.

Following the dissolution of Parliament a writ of election is sent to all constituencies declaring that an election must take place and setting the date on which polling will be held. 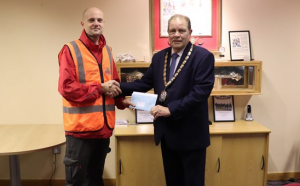 As a servant of the crown Mayor of Thurrock, Cllr Terry Piccolo, formally received the writ this morning (7 November).

Polling will take place on Thursday 12 December. Anyone not registered to vote needs to apply at gov.uk/register-to-vote before midnight on Tuesday 26 November.

Those who want to make a postal vote must register by 5pm on Tuesday 26 November. More details can be found at thurrock.gov.uk/voting-and-registering-to-vote/voting-by-post