By Staff Reporter on November 8, 20192 Comments 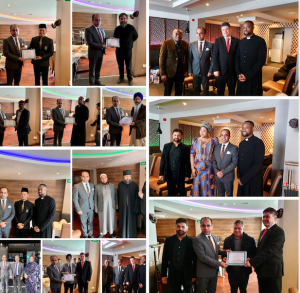 In his opening speech Cllr Qaisar Abbas said “The purpose of this event is to bring different communities together and to have an open dialogue for better understanding of different school of thoughts.” Imam Salim Rahman recited verses from the Holy Quran and said “Let’s come together and treat everyone equal.” Mr Colin Ricks, in his speech said “We need to preach message of hope and to turn away the politics of far right.” Ms Emerson said “It’s important to tolerate each other’s views.” Rev Sakharov, in his speech said “Orthodox Church is most adoptable and most constructive. We celebrate Unity because this is core message of Orthodox Church.” The Imam of Grays Mosque Mr Rashid said “We have to live together in harmony and peace.” 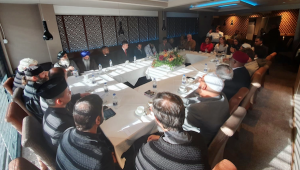 Senior Solicitor Mr Khan in his speech said “My religion teaches me to believe and accept every religion without any discrimination. This concept makes my horizon broad.” Grays Gurdawara Gayani Mr Rachhpal said “All human beings are alike and have same roots. Our doors are always open for all communities.”
Speaking at this event, Rev Drummond said “Being together, we will be protecting the most vulnerable individuals in society.” Pakistani journalist Ms Siami said “I urge all faith leaders to teach tolerance. We need to promote this core message for peace and harmony in the society.” Principal WIC, Mr Ashraf said “Education can open new horizons as it opens up minds and hearts.”

In her speech Ms Numbers said “I regularly meet with different people and it brings joy and happiness to my life. Preach peace and love people.” Imam Rasheed said “Love others as Islam always promotes peace and harmony.” Senior journalist Mr Casey said “Fairness does not mean you have to report everything what is being said.” St Clements Church’s Vicar Rev Peterson said “Young people need to take lead role in promoting peace and harmony among different communities.”
The guest speaker Mr Bana in his speech said “Our delegation is here to learn the British values and how communities in the UK are coming together to fight racism. We have huge respect for British people.”

The special guest, Cllr John Kent in his closing speech said “People of faith practice unity and respect one another. I urge people of all faiths to come forward and take part in public life. We need to respect people’s views.” Reverend Drummond made special prayers to formally conclude the session. The participants also observed 39 seconds’ silence to remember 39 lorry container victims.

After the meeting, we spoke to Mr Hasan al Banna (Director of Modern Islamic School, General Secretary United Muslims Association and Director of Philosophy and Faiths Board of Central Java, Indonesia).