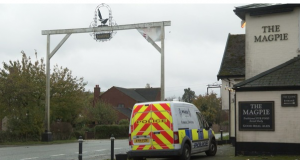 Officers were called to the pub, on the A140 between Norwich and Ipswich, in the early hours of Sunday 10th November.

The woman, who died at the scene, was Irena Kuzmina, from Purfleet.

Detectives are continuing to investigate the circumstances surrounding Irena’s death.

A Post Mortem examination was inconclusive and further tests are required.

A 52-year-old woman from Dagenham was arrested on suspicion of murder has been released on bail until Sunday 8 December pending further enquires.