Grays 39: Book of condolence to be closed four weeks after tragic incident 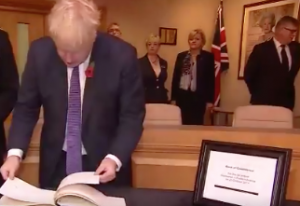 Book of condolence to be closed four weeks after tragic incident

THE book of condolence opened to allow people to pay their respects to the 39 victims of the tragic incident discovered in Eastern Avenue, Grays, on Wednesday, 23 October will be closed at 5:15pm on Monday, 25 November.

The book was opened at Thurrock Council’s Civic Offices the same day the victims were discovered and has remained open for more than four weeks. In that time the book has been signed by hundreds of local residents and dignitaries. It will still be available to sign until 4:45pm today (Friday 22 November) and between 8am and 5:15pm on Monday.

Flowers, candles and ornaments have also been left in Mulberry Gardens, Grays, which was established as a temporary location for floral tributes. These, along with tributes left in Eastern Avenue, will be respectfully removed on Tuesday, 26 November and any cards and small ornaments will be kept with the book of condolence.

Thurrock Council will liaise with Essex Police to ensure the book and any tributes kept are delivered to the appropriate Vietnamese authorities.

A longer term memorial will be considered in consultation with a number of partners early in the New Year.