‘The First Christmas’ a free exhibition researched and presented by Thurrock Museum Volunteers will be in the ground floor exhibition space of the Thameside Complex from Monday 9 December to Friday 27 December (closing at 11am on 27 December).

This exhibition looks at the first Christmas of World War II – what it was like in Britain, and especially the impact on Thurrock.

Food shortages were being felt and everyone was encouraged to ‘dig for victory’. Gardens were turned over to vegetables, and many allotments sprung up. Rabbits, goats, pigs and chickens were kept for food. People had to adapt their meals to what was available. Rationing was introduced in January 1940 – sugar, bacon and butter. 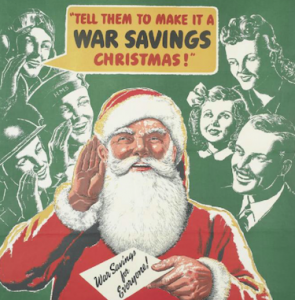 Petrol was already rationed. Thurrock shops were advertising their good and services, trying to tempt customers. Christmas gift buying was influenced by the war; children wanted replica uniforms to ‘look like Dad’, or be a nurse. Many families were separated, soldiers were in France and schoolchildren had been evacuated. The Royal Family spent Christmas at Sandringham, from where King George VI broadcast the Christmas message, and this exhibition also looks at how Christmas was recognised in Germany.

Also covered in this exhibition is the spitfire collision over Grays in 1939, and other local news from the end of that year.

The Museum Volunteers will continue to commemorate World War II in 2020 with exhibitions on Dunkirk, the Battle of Britain, the Blitz and the Home Front.