Four people in Grays celebrating a great start to the week after scooping a £1,000 cash prize each thanks to lucky postcode. 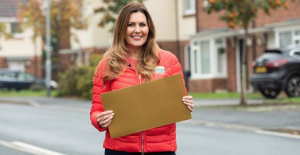 FOUR people in Grays are celebrating a great start to the week after scooping a £1,000 cash prize each thanks to their lucky postcode.

The neighbours netted the windfall when RM16 3EJ was announced as a Daily Prize winner with People’s Postcode Lottery on Monday 25th November 2019.

Sending her congratulations was People’s Postcode Lottery ambassador Judie McCourt. She said: “This is some amazing news to start the week! I’m thrilled for our lucky winners and I hope they treat themselves to something nice with their winnings.”

A minimum of 32% of ticket sales goes directly to charities and players of People’s Postcode Lottery have raised £486 million to date for thousands of good causes in Britain and beyond.

This draw was promoted by Canal & River Trust which has received over £8.1 million in funding from the players of People’s Postcode Lottery. It protects and maintains over 2,000 miles of canals and rivers across England & Wales, providing access to clean green spaces where they are needed the most.

Many good causes close to the winners have also benefitted from players support, and the next opportunity local charities will have to apply for funding will be early next year.