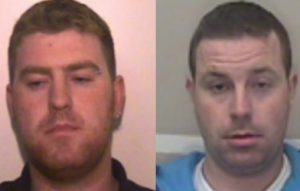 ESSEX Police have not been issued with a European arrest warrant needed to question two Irish brothers wanted in connection over the deaths of 39 people found in a refrigerated lorry.

It is more than a month since DCI Daniel Stoten from the Essex force went to Belfast to appeal to Ronan and Christopher Hughes to hand themselves over to the Police Service of Northern Ireland.

The brothers, originally from County Armagh, are believed to be living in County Monaghan across the border in the Irish Republic.

The Garda Síochána cannot arrest and question the Hughes brothers until Essex police get a European arrest warrant (EAW).

The Guardian has made repeated requests to Essex police asking if it has applied for the warrant.

An Essex police spokesperson confirmed that the brothers “remain as wanted by the force”, adding: “Essex police is working with partners to progress the case against these men.”

The pair are wanted on suspicion of manslaughter and human trafficking after the bodies of eight women and 31 men were found in a refrigerated trailer attached to a lorry at an Essex industrial estate on 23 October.

The use of an EAW enables police forces from EU member states to arrest and transfer suspects to the county where they are wanted for questioning.

Stoten confirmed on 1 November while in Belfast that Essex police had spoken to Ronan Hughes by telephone. He and his brother however have yet to come forward to the PSNI.

The Hughes brothers came under scrutiny after it emerged that Maurice “Mo” Robinson, the lorry driver who is accused over the deaths, telephoned Ronan Hughes shortly after he discovered the bodies of the in the trailer attached to his Scania cab.

Last month Robinson pleaded guilty at the Old Bailey to plotting to assist illegal immigration. During the hearing, Robinson, appearing via video link from Belmarsh prison, also admitted to acquiring criminal property – namely cash – between 1 May 2018 and 24 October 2019. He was not asked to enter pleas to other charges including 39 counts of manslaughter.

Robinson will appear again in court on 13 December.

While the Hughes brothers remain in the Irish Republic, Essex police have launched extradition proceedings to bring Eamonn Harrison from Ireland to the UK.

At the end of last month Harrison, from Mayobridge in Northern Ireland, appeared at Dublin’s central criminal court after he was arrested with an EAW in connection with 39 counts of manslaughter, one count of human trafficking and one count of assisting unlawful immigration.

Harrison is accused of driving the lorry with the refrigerated container to Zeebrugge in Belgium before it was collected in Essex by Robinson.