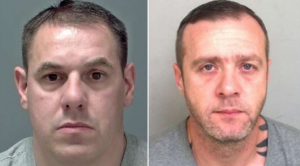 A PAIR of thieves, who stole more than £25,000 of goods in a spree of shop burglaries, including thefts in Great Cornard and Hadleigh, have been jailed for a total of eight years.

Jamie Channon, 41, of Chadfields, Tilbury, and Tony Moore, 37, of Sycamore Close, Tilbury, were each given four-year prison sentences at Ipswich Crown Court after pleading guilty to conspiracy to commit burglary.

The charges related to six instances of theft or attempted break-ins at convenience stores and a filling station shop in Suffolk and Norfolk, which took place between September 6 and October 14.

The businesses targeted included the Co-op in Canhams Road, Great Cornard, where the the two men broke into a cigarette kiosk and made off with a quantity of tobacco products on September 13.

Channon and Moore also broke into the Co-op in High Street, Hadleigh, during the six-week spree, which collectively resulted in more than £25,000 of cigarettes and tobacco being stolen.

Their crimes eventually caught up with them, after they were traced by police following their final burglary in Leiston on October 14, when they set off a burglar alarm and were recorded by CCTV cameras leaving the scene in a stolen Ford Mondeo.

Officers located the vehicle in the Stonhams as it turned on to the A140 from the A1120 and a pursuit ensued, with the Mondeo reaching speeds of 120mph in a 50mph zone.

At the junction with the A14 at Beacon Hill, the suspect went the wrong way around the roundabout, then entered the eastbound carriageway, travelling in the wrong direction, before stopping in Creeting St Mary, where the pair were seen running away from the car.

A police dog unit later followed a scent along a track, and discovered a balaclava and jacket, but the suspects were not located.

The Mondeo was seized and two duvet covers filled with cigarettes and tobacco were found in the car, along with a set of tools, razors, gaffer tape and a number of stolen vehicle licence plates.

Channon’s DNA was detected on the balaclava, while Moore’s DNA was on one of the duvets.

Channon was arrested in Tilbury on November 5, and charged the following day.

Moore was detained in Grays on November 28, and he was also charged the following day.

“Suffolk is not a soft touch and we will pursue and prosecute anyone who thinks they can target our retailers in this way, or indeed any of our businesses.

“We have a number of tools at our disposal to catch offenders, such as Channon and Moore, whether it is CCTV, forensic evidence or automatic number plate recognition.

“Criminals should be in no doubt that we will make full use of them to ensure successful convictions.”