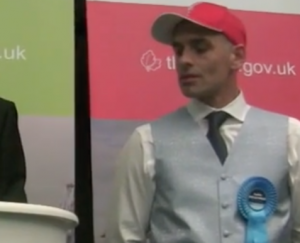 THURROCK MP Jackie Doyle-Price could find herself under cross examination in court after a man alleged to have continually harassed her, two local councillors and a council worker pleaded not guilty reports ThurrockNubNews.

Self-appointed children’s rights advocate Jack Barnes, known to many as ‘Megaphone Man’ for his continued protests on a number of issues outside Thurrock Council premises and other venues, appeared at Basildon Magistrates’ Court (Thursday, 9 January).

In November he was brought before the court after spending a night in the cells at Grays Police station after Ms Doyle-Price and colleagues complained about his behaviour outside the Conservative party office in West Thurrock.

He returned today for a plea and management hearing.

Three charges were originally on the court list but two were withdrawn leaving Barnes to face a charge that between 28 June and 23 November last year he pursued a course of conduct which amounted to the harassment of Jackie Doyle-Price, Mark Coxshall, Benjamin Gadsby, Mark Coxshall and Andrew Jeffries.

Mr Coxshall is Ms Doyle-Price’s partner and a local councillor who serves on Thurrock Council’s Cabinet. Mr Jefferies is also a Conservative councillor, while Mr Gadsby, a long-time local party supporter and former council candidate, works as a Conservative group support worker at the council.

On 12 November 2019 it is alleged he attended the Thurrock Conservative campaign offices and went into the office of Ms Doyle-Price and shouted ‘I want to talk to you’. This was also being filmed.

And on the court was told that on 22 November the defendant against stood outside council offices shouting and using a megaphone while was being filmed.

Over the following weekend Barnes was arrested by Essex Police after further protests outside the Conservative office on London Road, West Thurrock, and held at Grays Police station, prior to an appearance at Basildon Magistrates on Monday, 25 November.

At today’s court appearance, Barnes pleaded not guilty and the matter will now return for trial at Basildon on Friday, 13 March.

It is possible Ms Doyle Price, Cllrs Coxshall and Jefferies and Mr Gadsby will appear to give evidence – but they will not come directly face to face with Barnes, who has been denied the right to question them himself.

The court heard of the possibility that Barnes legal representatives might cease to act on his behalf, raising the possibility he might defend himself, but the court says if his lawyers do quit, the court will appoint someone to represent him.

As a condition of his release on bail Barnes cannot enter New Road in Grays (the location of the civic offices), not enter London Road, Grays, where the Conservative campaign office is.

He cannot be in possession of a megaphone, nor can he broadcast live or post on social media anything mentioning Jackie Doyle-Price.