AFTER a short, painful period of reflection, the Labour Party has a crucial decision to make over the leadership and direction that we will take now, following the worst defeat since 1931. The new leader faces an unenviable task. He or she must rebuild the Party, be an effective Leader of the Opposition and a credible Prime Minister-in-waiting. All this is at a time when the once rock-solid, dependable core vote of the Party has collapsed, and the current Prime Minister is enjoying a majority not seen since the days of Blair and Thatcher. 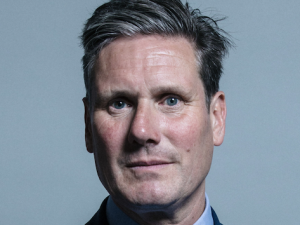 This is the most important leadership election since 1935 contest when Clement Attlee was elected. Attlee rebuilt the Party, was an effective Leader of the Opposition and a credible Prime Minister-in-waiting. The candidate who I feel can do this for today is Keir Starmer. Just as Attlee was able to gain a seat change of 239 in one election cycle against a titanic leader such as Winston Churchill in 1945, so I believe that Mr Starmer can gain the 124 seats needed to overturn Boris Johnson’s majority and form Labour’s first majority government of the twenty-first century.

He is the candidate who can re-build Labour’s Red Wall. With his deep background in the Labour Movement, and with the fights he fought on behalf of the ordinary working people during his distinguished legal career, he is well placed to speak to the people who abandoned Labour in Bridgend, Don Valley, Glasgow, Great Grimsby, Leigh, Sedgefield, Stoke-on-Trent, West Bromwich and Kirkcaldy & Cowdenbeath . His record as a lawyer fighting legal battles for miners is a story that needs to be told in Blyth Valley and Bolsolver.

Equally, he can restore trust in the Party in places that we lost in 2010 and are yet to regain. Places like Basildon. And Dartford. And Harlow. And Swindon. And – crucially – Thurrock. The road to Westminster runs through Thurrock, and Mr Starmer is the person who I believe can win here.

Keir Starmer has acknowledged that the Labour Party must deal once and for all with the anti-Semitism issue that has dogged the Party for far too long. He knows that Labour must be broad church again, with no faction ‘winning’ by driving out others. Just as Momentum are an integral part of the Party, so too are Blairites. He has said: “It can’t be a fight for one side to obliterate the other.” Just as established Trade Unions are crucial to the Party, so too are the emerging social movements being set up by people to defend their interests. Mr Starmer understands this well, having fought for and defended the activists from ‘McLibel’ during their 10-year battle against McDonalds.

As our country faces a decade of momentous upheavals, we need a Leader of the Opposition who can hold the government to account immediately. Brexit is happening, and that is the settled will of our country. Mr Starmer recognises and accepts this. What isn’t decided, however, is the kind of Brexit we will have. ‘Get Brexit Done’ was an effective election slogan, but it told us nothing of how Brexit would improve the lives of people in areas such as Ashfield, Burnley and Dudley.

From 31st January 2020, Brexit will have happened. However, from the 1st February 2020 we will still be following the rules of the European Union, albeit without any representation from MEPs, UK ministers or UK-appointed commissioners. The issue of ‘no-deal’ is still very much alive, as the implementation and transition phase of the withdrawal agreement only lasts until the end of this year. As of 1st January 2021, who knows? Keir Starmer has an unmatched understanding of Brexit and will resist the no-deal Brexit outcome, which would be a betrayal of those who voted Leave, hoping it would change their lives and communities for the better.

As a Prime Minster, Mr Starmer would be clear about what needs to change in our country. The wounds from the Global Financial Crash are still raw. The loss of trust around the MP’s expenses scandal is still not healed. Individuals and communities feel powerless. We need a major redistribution of power in this country so that people can take control of their own lives. He has said:

“The rich and privileged have always had the power they need to shape their lives and to shape the world in their own interests. Labour’s historic task is to open power up to everyone else so we can build the fairer world we believe in.”

My own political awakening as a boy came during the time of the Poll Tax. I witnessed, first-hand and close-up, the way in which the Thatcher government dealt with people who could not pay. Keir Starmer defended the Poll Tax protesters because it was the right thing to do. I am backing him now because I believe it is the right thing to do. It is right for the Labour Party and, crucially, right for our country.