Repossessions in Thurrock one of the highest in Britain 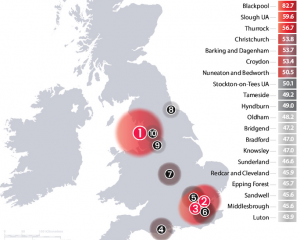 DATA released by the Ministry of Justice in November reported all mortgage possession actions in county courts increased in 2019.

It reads mortgage possession claims increased by 42% on 2018. Further, mortgage orders for possession, warrants issued, and repossessions also increased by 35%, 31% and 29% respectively.

Sellhousefast.uk, who help homeowners with the prospect of repossession, decided to investigate this issue, to determine which local authorities in England and Wales are currently most at risk.

Sellhousefast.uk analysed figures from the July to September quarter to find Blackpool is currently the most affected repossession hotspot in England and Wales, holding 82.7 (83) mortgage possession claims per 100,000 households. Followed by Slough – at 59.6 (60) and Thurrock – at 56.7 (57.)

Alternately, Sellhousefast.uk found the three local authorities with the fewest mortgage possession claims to be: Broadland (5.3 per 100,000 households), Woking (4.8) and Maldon at 3.6.

The Isles of Scilly had no mortgage possession claims in this period.

According to leading debt charity, StepChange mortgage arrears is – jointly with electricity bills and secured loans – a cause of concern for 18% of households** across the UK. Typically, the average arrears amount, relative to mortgage, is a total of £3,005.

Managing director of Sellhousefast.uk, Robby Du Toit comments: “There are resources available, should you face a possession claim or order. It’s daunting but imperative to seek guidance relative to your circumstance. Firstly, speak with a legal adviser and in turn, your lender. You can speak to your lender about your arrears at any point, even if they’ve started legal action. Communication – at all levels – is essential to avoid panic.”