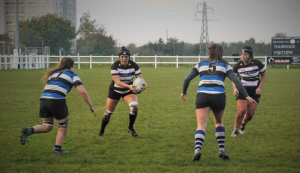 Saints took their opportunities and went in at the break 17-0 up. Saints line speed coupled with some questionable refereeing decisions & some masterful dark arts of forwards play from Saracens player & England’s most capped international Rocky Clarke kept Thurrock lookong for a plan B.

After the break T-Birds looked like a different side with an improvement in physicality & game management.

Scores from Tamara Nicholls & Maddy Lockwood (who was also voted player of the match for the 2nd game running) was not enough as Saints broke away twice against the run of play to keep their lead.

Thurrock T-Bird hearts were broken when a refereeing blunder resulted in an easily kickable penalty to earn a losing bonus point was changed to a scrum. The losing bonus point would of kept Thurrock top of the Championship table on points difference.

After the game coach Andy Yarrow said ‘I feel sorry for the girls, no dount OA’s deserved the victory today. They were clinical in attack & their line speed in defence left us unable to mount an attack, but I know how much the girls are hurting after this one.

It is frustrating that Saints are working so closely with Saracens. Having players like Rocky playing Premiership rugby for Saracens one week then Championship rugby for Old Albanians the next is probably something that should be looked at higher up the food chain. Rocky was your typical irritating experienced forward she led the OA’s defensive efforts, for a neutral it was probably a pleasure to watch.

We can only judge our own performance that simply wasn’t good enough on the day, but questionable officiating at Championship level is something that really needs to be picked up by the RFU or referee’s society’s. Today the referee might have apologised after the game for forgetting he was playing advantage but ultimately the losing bonus point could of been the difference between winning the Championship or not.

As a result Thurrock travel to Blackheath in a fortnight’s time knowing that ultimately the Championship is out of their hands. Thurrock need to win with Old Abanians losing to 6th placed Trojans or T-Birds win with a bonus point & Saints fail to pick up the bonus point. It is a Sunday where the girls really need your support! Plesse get to Blackhesth for a 2pm kick off.