Tilbury boat captain “nodded off at the wheel” as boat caused £1.6 million in damage 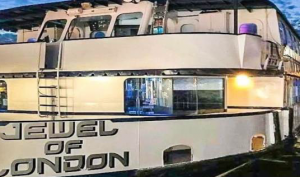 A PARTY boat captain nodded off at the wheel and hit a pontoon, causing £1.6million damage, after being kept up all night by his new baby.

Crew flew through the air when the Jewel of London hit the police dock on the Thames reports The Sun.

Skipper Daniel Wakefield, 38, then reversed it into a police launch.

More than 100 passengers had got off at 11pm before the boat crashed in Wapping, East London.

Dad-of-four Wakefield, of Tilbury, Essex, was fined £1,120 for misconduct as master of a vessel.

Judge Philip Bartle told Southwark crown court: “He thought he was doing the right thing, taking care of his family, with dire consequences.”

“I am sure Mr Wakefield fell asleep because he was tired as a result of his commitments at home.”

“He has four children and at the time of the incident his youngest was only a few months old.”

London Party Boats Ltd, who run the Jewel, admitted failing to ensure the safe operation of the ship.

Bespectacled Wakefield, sobbed as the court heard he might never again set sail on the Thames.