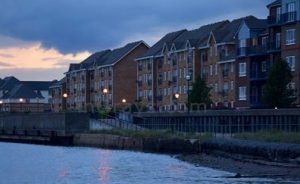 AT our first meeting of the new year Mark Rowland gave us a detailed and well-illustrated lecture on riverside commerce in Grays, south of the railway. In 1840 a pier was built for passenger steamers to London, also pleasure steamers, a service which was killed by the coming of the railway.

There were various wharves including Cole & Lequire and Goldsmiths, which carried out repairs. There was a tramway to the chalk quarries (now Badgers Dene) and another along Cart Lane. There was also an ammonia works, the product being derived from urine.

In 1866 land was acquired by Clark & Standfield. They were well established engineers and worked with Stephenson on various projects. They were the engineers of the London Tilbury & Southend Railway, best known for boat lifts on canals and created a floating dock, using a hydraulic ram to raise ships for cleaning, dry docks being very expensive.

Their first dock was built at Millwall. The Barrow Dock was constructed in Grays, being completed in 1882 and capable of lifting a 3200 ton ship. Their next dock was sent to Vladivostock and a slightly smaller one towed to Cardiff, taking 4 days. Other docks were built by such as Swan & Hunter and other ship owners. John Standfield drowned in 1890 when his ship Ville de Calais foundered off Margate. His partner Latimer Clark died in 1898 and that saw the end of the business. They had built a number of barges for Goldsmiths, small enough to use the Regents Canal.

Mark showed a 1916 map showing Clark & Standfield’s wharf, now a timber yard, including a jetty built in the late 1890s. The timber yard belonged to Alexander Bruce & Co, specialising in railway sleepers and telegraph poles. They imported timber from the Baltic, most railway sleepers being made from Baltic timber. The wood was seasoned for about 8 months, planed and put into vacuum tubes which took out moisture and pressurized creosote into the wood. The work was messy, not good for the health and continued right up to the 1950s and ‘60s.

Alexander Bruce carried on. After the war timber was used by the government for pit props etc. More ships were repaired rather than newly built and some barges and ships were built of concrete, as timber was not available for shipbuilding. Baltic timber was a seasonal activity and other work had to be found. Bruce’s wharf became the main British port for Lykes Lines ships which had a lift in the stern and carried loaded barges. Every 10 days British steel was loaded to ships for continental ports and the USA, using CAST Line from North America to Antwerp, bringing cargo to Britain in containers. Millwall closed in 1981 and in 1983 Columbia Wharf came to an end.

Our Grays maritime history was brought alive by Mr Rowland’s talk, maybe bringing back memories to our members.

Our next meeting is at 8pm on Friday 28 February at the Thurrock Adult Community College in Richmond Road, Grays, when John Matthews will be giving a talk on the Grays cement industry. Visitors are always welcome.