By Staff Reporter on February 6, 20202 Comments 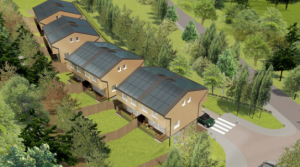 FEARS that a new housing development in Grays will harm badgers have been dismissed clearing the way for councillors to grant planning permission.

The plan to build eight semi-detached properties on Badgers Dene, adjacent to Curling Lane, Helleborine and Meesons Lane, was discussed by councillors in January but a decision on planning permission was delayed after concerns were raised by the Essex Badger Protection Group.

But after a meeting between the council’s planning team and the protection group, a report shows that “it was confirmed by all present that there was no evidence of badgers living anywhere on the application site” and no further objections have been lodged.

Next week councillors have been recommended to grant planning permission for the eco-friendly homes, despite more than 300 hundred objections which, along with the badgers, raised concerns about these homes being “out of keeping” with the area and overlooking existing properties.

The complaints have been sent to the council through a petition signed by 217 people and 93 letters.

A group of councillors who represent the Grays ward have also objected, stating that their concerns do not centre only on the badgers.

Councillors Martin Kerin, Jane Pothecary and Tony Fish said in a joint statement: “This scheme is bad for the residents of Badgers Dene, Messons Lane and Grays as a whole.

“The design is out of keeping with the area, it removes yet more open space for local residents, piles pressure on Belmont Castle Academy and compounds the traffic problems that were originally exacerbated by the London Road gasworks development.

“When you factor in the lack of genuinely ‘Thurrock-affordable’ housing, it is easy to see why this scheme should be thrown out.”

However, the council’s planning officers claimed in a report that the scheme makes “efficient use of the land” and while the design would be “different” it does not justify refusing planning permission.

2 Responses to "Controversial housing development in Grays set for approval"