Controversial plans for Badgers Dene thrown out by councillors 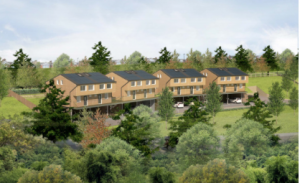 RESIDENTS sitting in the public gallery of a planning meeting gave councillors a round of applause as they voted to throw out a proposal to build eight new homes in Grays.

The plan to build eight semi-detached properties on Badgers Dene, adjacent to Curling Lane, Helleborine and Meesons Lane, was discussed by councillors on Thursday night.

While the council’s planning team had recommended councillors approve the plans, members were left unconvinced.

In total, seven voted against the development and just one voted to approve.

The reason for rejecting the plans centred on the design of the three-storey homes and the size of their gardens, which went against council policy.

But the biggest topic of discussion was the presence of badgers.

A decision on whether to grant planning permission had been delayed in January over fears the houses would be built on land occupied by a badger sett and potentially endanger the animals.

Further investigation by the council and the Essex Badger Protection Group concluded that there were no badgers living on the land but residents living in the area maintained there are.

Labour Councillor Gerard Rice pressed the planning team on the issue telling them “there are a lot of concerned residents” but the planning officer told the committee, “there were no badgers living on that site, there is no evidence of them living there”.

Conservative Councillor David Potter said: “I went down to this site the day after the last planning committee. I didn’t tell anyone I was a councillor and I walked around the site and I engaged with residents, saying at night do you see badgers, and most said yes we do.

“They had no reason to lie to me. I believe there are badgers there and I am pro-badger.”

Further concerns about were raised when the planning officer told the committee that three surveys had been carried out in 2018 and all took place during the day – despite badgers being nocturnal animals.

The officer justified the daytime surveys, explaining that they involved looking for “scratch marks and fur – we were looking for evidence they had been there”.

Labour Councillor Tony Fish, who represents Grays, said: “We all have serious objections to the proposals in this application.

“The design out of keep with surrounding properties, construction is completely different to properties on Meesons Lane, as regards to the issue of badgers, the residents clearly feel badgers are there. These properties will be completely out of keeping with the area.”

A joint statement from Mr Fish, along with Labour Councillors Martin Kerin and Jane Pothecary, who also represent Grays, said: “We are delighted with this outcome.

“We knew that this application was terrible for the residents of Badgers Dene and Meesons Lane – that’s why we campaigned against it.”