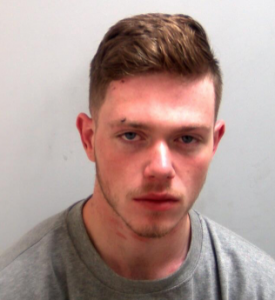 A MAN who assaulted his former partner in Grays while armed with a pair of scissors has been jailed for domestic related offences.

Jake Pittaway, 22, of no fixed address, received 24 months at Basildon Crown Court on Tuesday 18 February for possession of a blade in a public place.

One count of threatening a person with a blade will remain on file.

On Sunday 29 September 2019, the woman was awoken by Pittaway who had smashed a window at her home. She called 999 after Pittaway ran off.

Nine days later, he followed the woman into a block of flats before punching her to the back of the head as she entered her home.

Pittaway, who was in possession of a bike chain, entered the victim’s address and caused damage to her bedroom and her hallway. Once again, he fled the scene ahead of our arrival.

At around 2am on Saturday 26 October, the woman returned home after being dropped off by friends.

She was then assaulted by Pittaway who came out of an alleyway armed with a pair of scissors.

During the incident, he damaged a neighbour’s car before being chased by one of our officers, who detained him.

“His behaviour escalated rapidly in just a month.

“Pittaway started off by breaking a window at her home and he ended up being arrested for assaulting her while in possession of a weapon.

“We have been supporting the victim and brought the case to court where he has since been jailed for two years.”