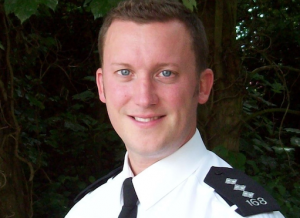 THE new District Commander for Thurrock says he will focus on making the area an ‘impossible place to operate for gangs and violent individuals’ after taking up the role.

Chief Inspector Richard Melton started in the role last month and is no stranger to the district having worked as both a Sergeant and an Inspector in Tilbury and Grays between 2009 and 2011.

Beginning his Essex Police career 22 years ago, he has had many different uniform roles with his most recent post being the Chief Inspector in charge of Armed Policing in Essex.

In recent years he has also been District Commander for Braintree & Uttlesford districts, lead the local policing support unit [LPSU] at Headquarters and formed the Emergency Service Collaboration Programme with the fire service at their HQ in Kelvedon.

Chief Inspector Melton said: “I have a real passion for local and community policing and I’m delighted to have the opportunity to serve the people of Thurrock again.

“As an experienced Chief Inspector of 7 years, I have an extensive background in partnership working and I can’t stress the importance of working with Thurrock Council, wider partners and all other blue light agencies to achieve the safest Thurrock possible”

He also volunteered for the RNLI as helm and training manager for nearly a decade and spent 10 years as a community first responder emphasising his dedication to public service and keeping people safe.

“His extensive experience of working with the public, both in a voluntary capacity and professionally at Essex Police, is much admired.

“We have already seen CI Melton in action during the past month when he joined us at our last Full Council alongside PFCC Roger Hirst, and when we launched two new Town Centre Teams dedicated to patrolling Tilbury and Purfleet.

“I look forward to working with him as together we build on the successes we have already seen in Thurrock, and continue to take the fight to criminals and those committing acts of anti-social behaviour.”