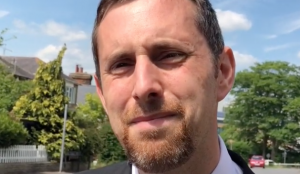 HARLOW district Councillor Chris Vince has been selected to represent Labour in this year’s Police, Fire and Crime Commissioner elections which are scheduled to take place in May. Chris, who was elected as Councillor for Little Parndon and Hare Street Ward in 2018, stood to be PCC in 2016 and on that occasion achieved the most votes of any candidate in Harlow.

“I am delighted to have been selected to represent Labour in these elections and I would like to thank Labour members from across Essex for their continued faith in me. I am looking forward to getting out and campaigning across the county to show residents why I am the right choice to be the next Police, Fire and Crime Commissioner for Essex. I will be a PFCC who will work proactively with both the FBU and the Police Federation as well as the staff themselves to ensure our police officers, fire officers and staff feel valued and supported in doing their jobs as effectively as they can. I’ll continue to lobby central government to reverse the heavy cuts that Essex police and Essex Fire authority have faced over the past ten years.

For me the role of PFCC is one which must be outward looking which is why, if I am elected in May, I will work within communities to ensure that we are proactive in bringing crime down across the county and ensuring that residents feel safe! As a teacher I recognise the importance of being proactive in preventing crime and the damage caused by fire. Sadly when faced by austerity it is usually these preventative measures which are the first to be cut.

A vote for me on the 6th of May is a vote for a Police Fire and Crime Commissioner who will work so hard across all of Essex, who will truly listen to the concerns of residents who will be tough on crime as well as the causes of crime.”

Chris is currently a secondary school Mathematics teacher working in Great Dunmow. He is involved with a number of volunteer organisations and charities including Action for Family Carers, Razed Roof and Changing Lives, who support young people vulnerable to becoming involved in gang and knife crime.