Rugby: Thurrock U-14 side defeat Rochford 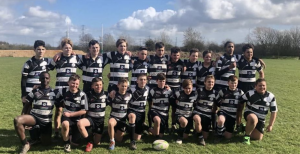 HOT on the heels of big wins v Harlow and Colchester, this Thurrock rfc u14 side took on a very useful Rochford RFC side at Oakfield on Sunday 8th March.

Weather conditions were challenging at Oakfield to say the least and Tees played with the assistance of a strong wind in the first half. Right from the off, mid field Tees pairing Early at 9 and McAllister at 10 were hungry for the ball moving their forward pack along so well that bustling no.8 Reynolds twisted his way past the Rochford defence for a try on Tees first attack. The try was duly converted by McAllister. 7-0

Rochford’s restart was affected by the strong wind and soon Tees were on the offensive. The tackling from Tees forwards Crawford, Smythe and Overy, in particular, kept the pressure on the visitors and did not allow them into Thurrock’s half. Any ball that was kicked upfield was been run back at them quickly by, in form, full back Cook.

A cute and varied kicking game assisted by the strong wind, by both McAllister and Holding also ensured that the Rochford side were being turned. On one such attack, flanker Cooper cut loose by the right touchline to run in a try under the posts. Duly converted by Cook 14-0.

Tees were back on the offensive after the restart. Ever Alert hooker, Overy snook in the defensive line to take an intercept and charge down towards the try line. From the ensuing ruck melee, Cook joined the attack only to be stopped by a ‘seat belt’ as he was about to score. Referre, Mr Crawford awarded a penalty try 21-0.

On 24 mins Nico Martinaro scored a wonderful individual try from his own half as he waltzed and pushed his way through the Rochford defence to make is 26-0, Holding duly converting 28-0.

So hungry are this Tees u14 side that the final move of the half with McAllister then Overy playing in Holding to go over in the corner to make it 33-0 at half time.

Rochford are and always have been a quality outfit and with the turnaround after half time it was Rochford’s turn to put Tees defensive capabilities to the test. Two tries and Rochford were back in this game. 33 – 12. However Thurrock’s centre de Breuk took charge of his defensive line and they worked a great move upfield against the wind with impressive Milo Wilsher getting on the end of a great move to go over in the corner. 38-12. This try was the clincher. Rochford fought on gamely and did score a further try and conversion to make the final score 38-19.

On this day all the Tees players did their bit and working as a team they proved that they are far better as a team than the sum of their parts. Tees u14 Coaches Driscoll and Ray along with all the boys deserve loud praise for the quality of this display.