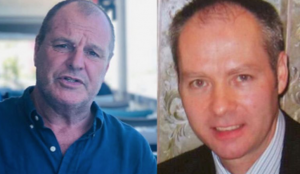 Steve is a former Rocks player, having been with us in the early 1990s. He was a key member of Roger Bond’s side which gained promotion to the Isthmian League by finishing joint top of the Essex Senior League in 1991-92.

An uncompromising defender who also scored more than his fair share of goals, Steve also featured for Canvey Island, Dagenham and Basildon United. Since retiring from the game, Steve has remained close the club, and is a popular figure around the Rocks Club.

Joining Wiseman at this time is another “Steve” in Steve ROBINSON (pictured right). Steve is the Rocks new vice-chairman & secretary.

Steve has many years admin experience at non-league level, and will be best known as a long serving former chairman, secretary and owner of Southend Manor FC. After leaving Manor, Steve had a spell as secretary of National South side Billericay Town.

We hope to bring you messages from the two Steves’ over the next week or so, as they look to stabilise the club in preparation for the return of competitive football, whenever that may be.

A fourth new face around the club, but no stranger to us is former goalkeeper and manager Glen Case. Glen who still holds the Rocks all time first team appearance record, having amassed 642 games for the club, will be looking after the maintainance of the pitches at the Grayers Graphics Stadium.

As stated previously, we have the contact details for everyone else who volunteered their services at the recent open meeting. We haven’t forgotten you, and will be in touch in due course. You are very much still needed.

At this time, it would be remiss of us not to express our sincere thanks to retiring chairman Brian “Bruicie” Mansbridge, secretary Linda Pegrum, and treasurer Christine Coventry. along with Mick and Margaret Stevens who have done so much between them to help John Coventry keep the club running.

Very few people really understand or appreciate the commitment this special group of people have given to the club over the years.

East Thurrock United will continue and hopefully prosper, but the place will never be quite the same without these people around.