Popular landlady at award-winning pub in Orsett has died 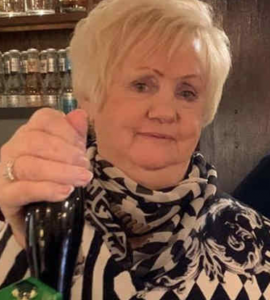 MESSAGES of sympathy and tribute have flowed this evening (Thursday, 9 April) after it was announced that Margaret Orman, popular landlady of the Whitmore Arms at Orsett has died.

In a brief statement on the club’s Facebook page Margaret’s family have announced: “We want to thank you for the kind messages of support over the last two weeks.

“It is with much sadness we have to let you know our beloved Margaret lost her short battle this evening.

“We’d like to place on record our heartfelt thanks to all the NHS staff, who have cared so selflessly for our Margaret, especially Emma.

Margaret and husband Jim, together with daughter Victoria and son Jamie have made the multi-award-winning pub one of the most popular in the borough since taking over in 1994.

Jim and Margaret are both locally born and bred. Five generations of Jim’s family have worked in the retail trade, selling everything from newspapers to confectionery and then running the post office in West Tilbury.

Margaret and Jim entered the licensing trade in 1987. After a very successful period in their first pub, the took over the Whitmore Arms and the pub has grown considerably, winning many local and national awards.

Among the many tributes paid, former borough mayor Carl Morris said: “This is such terribly sad news and such a great loss to the Thurrock community. “

Orsett villager Kelly Woodhouse summed up many comments by saying: “Words can not Express how sad we feel. Margaret was the back bone of our village and a great friend. She was an absolute legend.”

Those sentiments were echoed by Amanda Wickens, among many, many others, who said: “So sad to hear this. The loss of Margaret will leave a big hole in the village. Rest in peace and sending much love to the family. The Whitmore won’t be the same without her.”