Thurrock residents kept in the dark over A13 overspend costs 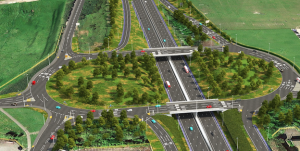 THURROCK Council is continuing to be tight-lipped over how significantly overbudget the A13 widening project is after refusing to answer a freedom of information request.

The work taking place between Stanford-le-Hope and the Orsett Cock roundabout has faced a range of setbacks and delays ranging from public safety issues linked to bridge designs to inaccurate land studies that needed to be repeated.

A council report published in January revealed that Thurrock Council has been left scrambling to find the extra cash needed to allow them to finish the work.

The project was originally allocated a budget of £79million and was due to be completed in the autumn but since the delays were revealed, the council has consistently refused to make public how much it has overspent on the project or the new timeline for completion.

When asked for information on the scheme’s budget in a freedom of information request submitted by the Local Democracy Reporting Service, the council has once again chosen to keep the public in the dark despite the possible implications for taxpayer funds.

It claims that it cannot answer questions on the overspend because while it does have the information, it will be published “at a future date”.

Labour Councillor Martin Kerin who chairs the council’s regeneration committee has been calling for accountability over the issue.

“Back in January, I pressed senior councillors and officers for the figure of the A13 overspend,” he said.

“To date, no figure has been supplied.

“As we are now in April, it is only right and overdue that this figure is released so that opposition councillors can exercise democratic accountability. Our residents have a right to know how their money is being spent or misspent.

“As a responsible opposition, we are aware of the effect that battling Covid-19 is having on the operation of the council. Having said this, we need to be aware of the figures, so we know what we are facing once we have beaten the virus and return to normal.

“It’s the least our residents expect of their opposition.”

Conservative Councillor Ben Maney, who oversees Highways and Transport, was contacted for comment.

A council spokesman said in January that the figure would be revealed at an “appropriate time”.