Listen to Homemade Radio during the lockdown 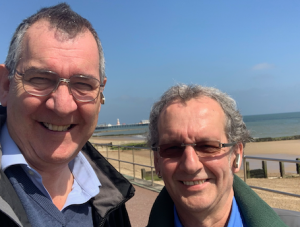 IN the Spring of 2019 two local radio presenters from Essex decided they had had enough of mainstream radio. Former local radio presenters Brian Ager & Mike Jones realised they couldn’t stand the constant commercials, zoo formats and endless phone-ins relying on listeners to create their programming……….so they started their own platform and called it what it is, Homemade Radio.

Homemade Radio started small with just two live shows per week but with the support of their listeners from their previous radio stints the shows became highly successful, gaining a huge following. From the outset Mike & Brian realised that since Radio 2 changed their demographic target there was a gap in the market for listeners of a certain age, the people who’d grown up as listeners of music rather than consumers of music. They decided that there would be no boundaries to the style of music they played, the only caveat being that it’s good, you won’t hear top 40 or commercially trendy songs here. This is, as the station header states, Music & Nothing Else. Once people discover what the station is all about they are staying and staying in droves. Musicians from both sides of the Atlantic are realising what a great platform it is and both Mike & Brian regularly receive World Exclusive radio plays long before the more established stations. Look at their feed and you will see both unsigned and established bands thanking them for playing their music and listeners filling Facebook pages with praise.

Then came the lockdown.

Mike & Brian made the decision to “go live” 7 days a week, as much to keep themselves busy as anything else. Neither of them were sure if this would be successful but took a chance on broadcasting live from Midday to approximately 5pm during the week, Brian from Midday to 3pm, followed by Mike until he decides to finish around 5-5:30. They also decided to do additional shows at 1pm on Saturdays and Midday on Sunday. These extra shows have been a runaway success with huge audiences tuning in and contributing to the playlist with requests. They have been inundated with messages from listeners conveying their gratitude to them for providing not only entertainment but also a diversion from what’s happening in the world right now. As Mike said “We’re calling it diversionary radio. People sometimes just want to switch off from the news around them and thats we aim to do, just entertain with no hidden agenda or gain”.

Homemade Radio makes no money whatsoever being 100% self funded with absolutely no sponsorship or advertising. They chose to do this as a hobby as they both love what they do. Brian has amassed a huge music collection and said “People have always asked me why I love music so much, and my stock answer is that music is the only thing in my life that’s never let me down. I’ve always being a music fanatic and this is just an excellent way for me to share my collection.

Mike and Brian have no real ambition to take the station to DAB, they love the freedom their own platform gives them. In saying that however, they have been amazed at how popular their baby has grown in less than a year and would love more people to give it a go.

You can listen by going here — www.homemaderadio.co.uk