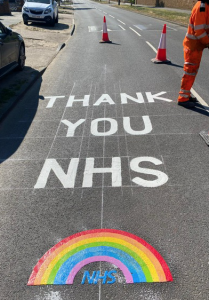 RESIDENTS and a local councillor have praised roadworkers who have created a tribute to the NHS on a borough road.

Chadwell St Mary-based contractors Henderson & Taylor, who were carrying out resurfacing work on Long Lane in Stifford Clays, close to Thurrock Community Hospital where many Thurrock outpatient services are located, decided to make their mark.

The rainbow tribute created by the workers has already won many fans, among them Cllr Gerard Rice who said: “This is a really nice gesture, made at no cost to the council.”

Thurrock Council said: “ We have shown our appreciation for all the tremendous work being done by the NHS, and everyone who works for the NHS locally and nationally, with these two amazing rainbow road markings in Long Lane, Grays, right outside the hospital entrance.

“Massive thanks also to Henderson & Taylor who did the work for free.”