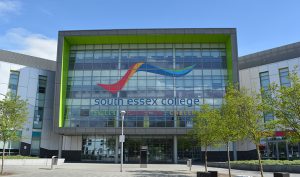 NEW school grounds are to be built near to South Essex College in Grays as part of a plan for a temporary secondary school.

The council has given planning permission to the Osborne Co-Operative Academy Trust to use land on the High Street, at the southern junction of Argent Street, to create new school grounds including a playground.

It will form part of a temporary school at South Essex College’s Thurrock Learning Campus which is due to open in September.

The campus will be re-purposed to accommodate 120 year 7 pupils who will eventually join the new Thames Park secondary school due to open on land adjacent to Palmer’s College in Chadwell Road, Grays, by September 2022.

Planning documents called the proposed grounds “an essential component for the temporary school” and council officers stressed it would only be there for a limited time, with planning permission being on the condition that the land is restored after 2022.

Officers also said they expect the grounds to be used only by school pupils and for a short time at the end of the day for any clubs or school-based fixtures.

It is “unlikely to give rise to nuisance,” their report added.

The planning permission comes seven months after the Osborne Co-operative Academy Trust announced the Department of Education had backed their plans to build the Thames Park Secondary School, which is expected to create 900 new places in the borough.

The school is said to be modelled after St Clere’s Secondary School in Stanford-Le-Hope, which was rated ‘Good’ by Ofsted in December 2018.

Another temporary school is also due to open in September at the Thurrock Rugby Club in Blackshots. This will be operated by the South West Essex Community Trust and its 120 pupils will later join the planned 1,200-place Orsett Heath Academy which is also expected to open in 2022.

Previous plans were for the school to open in September 2019 but this collapsed due to delays in funding from the Department of Education.