EVEN though we were all expecting the sad news of the death of Fr Paul, it was still a shock to hear it confirmed. When you encounter someone as warm, generous and kind-hearted as Fr Paul, you feel as though they will always be there. In Fr Paul’s case, he was always there for his flock, sharing in the good times and the bad times of their lives. 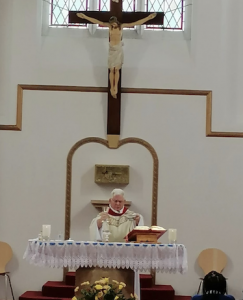 Everyone knows about the severe shortage of priests within the Roman Catholic Church. In the case of Our Lady Star of the Sea, Tilbury, and Our Lady & St Joseph, Stanford-le-Hope, the shortage was so severe that, ten years ago, the Diocese of Brentwood sent Fr Paul Dynan to do a job that had always been done by two. He became priest of both parishes concurrently and made himself a pillar of both communities.

We were fortunate to have Fr Paul for as long as we did. He trained for the priesthood later in life, following the premature death of his wife and having seen his three children reach maturity. He had had a distinguished career in the NHS before he answered God’s call to lead a life of ministry and service. After initially serving in Basildon, he was sent to Thurrock by Bishop Thomas McMahon at a time of great uncertainty for the people of Tilbury, Stanford-le-Hope and the surrounding areas. He divided his time equally between both parishes, and won the hearts of his flock, through his example as a kind and wonderful shepherd.

For me personally, Fr Paul shared in the good and bad times of my life during his decade of service to the Catholic community of Thurrock. He baptised both of my children and blessed the 10th anniversary of my marriage. He also presided over the funeral of my mother.

So many parishioners have touching personal anecdotes about times Fr Paul was there for them – during good and bad. He was so wonderfully paternal with the young people of the parishes – smiling happily during the weekly ‘children’s liturgy’ for the young children and beaming with pride around the teenagers who were preparing to be confirmed. His anecdotes about his own children and grandchildren were always a joy to hear.

He steered both Tilbury and Stanford-le-Hope through their centenaries and was in the process of helping to steer the Thurrock Deanery though further changes when a reoccurring tumour struck again and forced his retirement from parish life. Through much of his tenure in Thurrock, he was plagued by the tumour – seeing it off, only for it to return again and again. Through it all, he never lost his devotion to his calling. He had had periods of time away from his parishes when he was receiving treatment for his illness. Therefore, when he said his final Mass on 31st October 2019, it felt like he would, like before, be back again one day. Alas, it was not to be. Fr Paul’s final act of selfless service to his people was handing over his successor, Fr Anthony Cho, who has carried the flame and is ministering to Our Lady Star of the Sea and Our Lady & St Joseph with devotion and care, especially during these current uncertain times.

Fr Paul leaves behind his precious children and grandchildren. He leaves behind countless people who were touched by his warm heart and generous spirit. He leaves behind a legacy of devotion to the Gospel and service to his people. He will be missed by all were lucky enough to have known him. May he rest in peace and rise in glory.