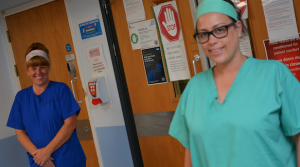 IMAGINE being told you have covid-19 and need a ventilator. You’ve seen it in the news, so you know what that could mean. Frightened, you spend the next few minutes hurriedly sending a text message to your sister and mum, saying your goodbyes but also asking them to look after your eight year old daughter, who you haven’t seen for weeks. And now you are afraid you’ll never get to see her again. 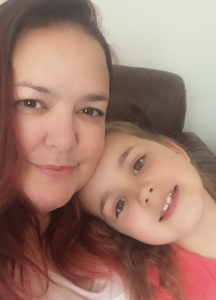 That was the potential reality that faced Joanne Campbell as she frantically sent those messages to her loved ones from her hospital bed in Southend University Hospital.

Now, out of hospital since the beginning of April, and on the road to recovery, the 41 year old from Canvey Island, said: “I thought ‘that’s it, it’s my time’. I was scared but in my head I was saying to my late step dad that I just wasn’t ready to see him yet. I didn’t want to go and I had to fight it.

Within 30 minutes of being told, the intensive care team had me on a ventilator.”

And fight she did, for three days on a ventilator. In her corner fighting with her were the dedicated hospital staff from Southend University Hospital, from the Emergency Department, the Critical Care Unit and Rochford Ward. In total Joanne was in hospital for eight days before going home on 4 April.

Joanne said: “It goes without saying, but I am so grateful to every single person who looked after me at the hospital, not that I remember any of their faces as they were all wearing masks and full PPE, so all I remember are lots of caring eyes. I wouldn’t recognise any of them if I walked past them but I shall be forever in their debt.”

Two of those people who cared for Joanna and helped her recover were Arlene Bartholomew, deputy ward manager, and Mica Walpole, a healthcare assistant, both from Rochford Ward.

Arlene said: “It’s a happy ending, and these happy endings like Joanne’s have been the things that have kept us going through this.”
Mica, said: “Although it’s very emotional, it gives the whole team a real boost. At times it can be like a rollercoaster – crying one minute and smiling the next – but we are all very supportive of one another.”

Her illness didn’t just impact Joanne and the dedicated staff who cared for her; there was also Joanne’s family who nervously received an update once a day.

“It was also my mum and sister who saw I’d taken a turn for the worse and got me an ambulance; another 24 hours and I don’t think I would have been here. I owe them so much and can’t wait until I can give them a huge hug when it is safe.

“I didn’t see Isabelle for a month as I needed to keep her safe whilst I was at work. It was really hard, so when we did see each other again after beginning my recovery back at home it was an emotional meeting of mum and daughter to say the least. Especially as neither one of us knew if we would see one another again.

“On the mental health side of things it is hard to not think about what could have happened. It’s a constant that plays through your mind, but I know that I have huge support from my whole family, friends and work colleagues.”

And Joanne has just started her return to work, as a police medic in Thurrock. Although her breathing has vastly improved and her recovery has been good she’s just taking baby steps as she still feels very fatigued.

Joanne added: “I may have been close to death but out of something so bad, I think it is important to find positives and to look at what good we can take away from it.

“As a community I think it has brought everyone closer together. Neighbours are talking more and friends and family are in touch more than they used to be. And that can only be a good thing, because – Covid-19 or not – none of us knows how long we have got.”