Freedom of the Borough honour conferred on three Thurrock clergymen 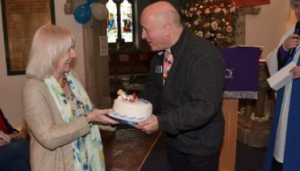 Freedom of the Borough honour conferred on three Thurrock clergymen

Reverend Guest and Canon O’Shea are bestowed this tribute as they retire from their roles. Sadly Father Dynan passed away very recently but was made aware of the honour by Councillor Martin Kerin shortly before he died.

All three men served communities across Thurrock including St Margaret’s Church and Our Lady and St Joseph, Stanford-le-Hope; St Thomas of Canterbury, Grays; and Our Lady Star of the Sea, Tilbury.

Mayor of Thurrock Council, Cllr Terry Piccolo, will present the awards to Reverend Guest, Canon O’Shea and the family of the late Father Dynan at a formal ceremony later in the year but they have been sent a letter from the Mayor and Deputy Mayor, Cllr Sue Shinnick, informing them of this recognition.

Cllr Piccolo said: “I am delighted that Reverend Guest, Canon O’Shea and the late Father Dynan have all been recognised for the hard work and dedication that they have put into serving Thurrock and its residents.

“The Freedom of the Borough is an honour held in the highest esteem, and is bestowed to individuals so we can publically recognise their invaluable contributions to our borough’s civic and pastoral community.

“My heartfelt congratulations to you and your families. I offer my deepest condolences to Father Dynan’s family, friends and all those who knew him. I hope that this recognition of the role he played in our community offers some comfort at this time.”

“This is a fitting tribute to all three clergymen who have had a notable and lasting impact on the Thurrock residents they have supported over many years. They deserve to be recognised for their efforts and we offer this award as a token of our gratitude.”

The Freedom of the Borough is the highest honour a council can bestow and has previously been awarded to:

· The Thurrock Branch of the Burma Association (26 November 2008)