Grays driver in need of a new phone shocked to win £4,900 of Apple goods 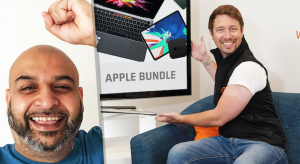 Grays driver in need of a new phone shocked to win £4,900 of Apple goods

A GRAYS chauffeur who was in need of a new phone got more than he bargained, winning £4,900 worth of Apple goods thanks to lifestyle competition, BOTB.

Self-employed Gulshan Bagga, 46, from Grays, is used to driving clients around central London, but during lockdown has been stuck at home unable to work, and the time indoors made him realise how much he needed a new phone.

“That’s why I played for the Apple bundle, I thought I needed a new phone, but you also get all this other great stuff too,” said Gulshan.

“I can’t believe I won, you never think it will be you.”

As well as an iPhone 11 Pro, Gulshan is now the proud owner of a brand new MacBook Pro, an iPad Pro, Apple Watch Series 5, an Apple Homepod, an Apple TV 4K and Apple AirPods.
“There is so much and I have two grown up daughters – I’m pretty sure I may have to share some of this out with them,” he said.

Gulshan was surprised by BOTB presenter Christian Williams who contacts winners every week to deliver the good news.

“Telling winners is the best part of my job,” said Christian. “It’s been a tough time for many during lockdown with many people stuck at home and unable to work, so I’m glad I could give Gulshan a nice boost after a couple of difficult months.”

Since being founded in 1999 by William Hindmarch, BOTB has given away over £32m worth of prizes.

Listed on the stock market, BOTB has a high-profile stand at airports although most people play online at BOTB.com.

To see Gulshan’s shock reaction alongside a host of other lucky winners, head over to BOTB.com.