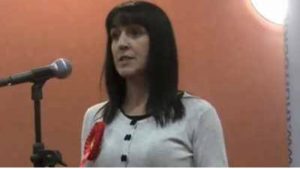 COUNCILLOR Lynn Worrall fiercely criticised the management of the Tory house building plans at Wednesday’s meeting of the Housing Overview and Scrutiny Committee.

Following the Tory u-turns on building on five sites in the last three months, Chair of the Committee, Cllr Worrall, asked how the consultation process was being followed. Pointing out the inconsistency of the removal of each site at the personal intervention by Cllr Johnson, the Cabinet Member for Housing.

Cllr Worrall highlighted that one site in the ward that Cllr Johnson’s represents was removed following his personal delivery of letters asking residents for their views. In other sites in South Ockendon where Cllr Johnson lives, he told residents to provide their own petitions and those sites were also removed.

Cllr Worrall pointed out there were many more unsuitable sites on the blighted Tory list, many on green spaces, where residents had been given no option to remove them and asked how this was fair and transparent.

Cllr Worrall said “I am extremely worried that the Portfolio Holder for Housing has been following his own rules. He has removed sites where he is ward a councillor and where he lives. What about the residents not luckily enough to be in those areas?

House building plans need to be thought through so they’re suitable for residents in the borough. Not just destroying our green spaces or removed on the whim of a portfolio holder.”