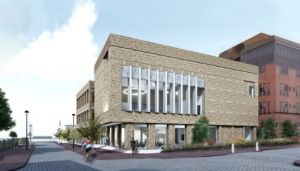 THURROCK Council Tories have voted unanimously to move forward with a major redevelopment of the council offices in Grays.

The £10million project has faced widespread criticism from residents and opposition councillors since it was revealed almost two years ago.

But during a Cabinet meeting on Wednesday, Conservative councillor Mark Coxshall, who oversees regeneration projects, said the criticisms have all been “party-political” and called the project “critical” for the council.

Under the plans, the existing offices on New Road, Grays will be split in two, with one side being retained and extended for council use and the other converted into a residential area comprised of 80 flats.

Mr Coxshall said a three-week consultation undertaken in April at the height of the Covid-19 pandemic indicated the scheme had public support as there had been just a single response from a properly developer.

He told the cabinet: “It really is critical we move the Grays council offices into a 21st century building, fitting around the mantra of better services, fewer buildings.”

Referring to the consultation, he added: “Considering how much has been said about this, it just goes to show that this was all party-political point scoring and not actually people wanting to deliver better services.”

Council leader Rob Gledhill echoed Mr Coxshall’s enthusiasm for the scheme claiming there has been “nasty politics” around the project.

Councillors voted unanimously to authorise officers to take “necessary administrative and accounting steps” to “appropriate” Mulberry Square to build the extension to the council offices.

Labour Group Leader, John Kent said: “To push forward with seizing Mulberry Square on the back of a short, sham consultation in the middle of lockdown is appalling.

“For Conservative councillors to claim that a lack of response is anything other than a damning indictment of their secrecy, that it is somehow a ‘fantastic’ endorsement of their plans to build new council offices on Mulberry Square is simply ridiculous – and they know it.

“Appropriation is a technical legal process that has been little used before in Thurrock – recent examples from elsewhere, include helping the building of new football stadiums for Tottenham Hotspur and Chelsea.

“Taking such seldom used powers to push forward this build during the midst of the reported council financial crisis, with the council borrowing at 1.2 billion highlighted in national newspapers, has been met with surprise.”

The new council offices project has come under heavy scrutiny since it was first revealed with many questions focussing on what benefits it will offer to residents. At an early planning meeting, members of the planning committee refused to grant planning permission over the issue.

The £10million extension also forced four independent business owners to relocate shortly before Christmas as the building they were operating from is due for demolition to make way for the new council building.

At the same meeting, the cabinet heard how the council is facing “very difficult times ahead” due to the financial impact of the Covid-19 pandemic.

Deputy council leader, Councillor Shane Hebb, warned some services “may come to an end” and council tax may have to increase.