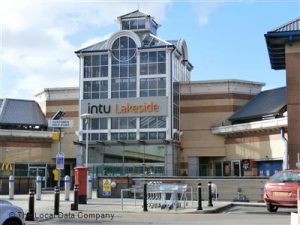 MAJOR plans to extend Lakeside shopping centre and turn it into a “regional town centre” are set to be granted planning approval.

Under the plans being discussed by the council’s planning committee next week, part of the Debenhams store at Intu Lakeside will be demolished and a new multi-storey car park will be built, along with a ‘town square’

Intu has said in planning documents that almost 3,000 new jobs will be created and it is prepared to invest up to £168million into the improvements.

The company adds that the extension will transform the shopping centre into a “regional town centre”.

To the north of the centre will be a new street-style shopping area, while the existing bus station will be knocked down and replaced with a three-storey department store.

The existing Debenhams store will then be converted to accommodate several new shops.

Planning documents state that a total of between 30 to 40 new stores will be added to the shopping centre and this, combined with changes to the layout, means a multi-storey carpark will need to be built to the north of the new department store.

Close to the car park will also be the new town square. This public space will be a small area free of cars that can be used for art installations and seating areas.

To make up for the loss of the bus station, a new and modern replacement will be built at the opposite side of the shopping centre, close to the footbridge that connects to Chafford Hundred Station.

A new pedestrian and cycle path is also planned to the north of the shopping centre, as well as a dedicated dual use footway and cycleway close to the bus station.

In a report published ahead of next week’s planning committee, council officers recommended the plans are granted planning permission.

The report explained up to 1,553 temporary construction jobs will be created and once work is finished, there will be up to 2,930 new jobs.

It said: “The development would bring forward a high quality, modern and sustainable extension to the Intu Shopping centre, raising the profile and environment of the Lakeside Basin with facilities to which would benefit of all users.

“The proposed new bus station and associated new footway and cycle links would provide much needed and improved opportunities for sustainable transport usage in the area as an alternative to the high level of private vehicle usage associated with this site.”

It added: “Whilst there would be some disruption during the construction phase of the development these impacts could be controlled and would be short lived.

“The outcome of the development when operational would result in clear benefits to the Borough that outweigh any disruption experienced during the construction stages.”

Planning approval will be discussed on Thursday night.