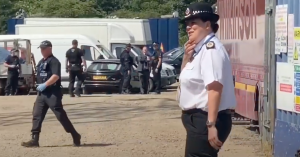 Officers carried out a warrant in Orsett on Tuesday 23 June.

ESSEX Police attended a site on Brentwood Road following intelligence that the site may be being used for criminal activity, including immigration crime.

A 32-year-old man was arrested on suspicion of obstructing a police officer in the course of their duty.

He was further arrested on suspicion of theft of motor vehicles and handling stolen goods after an estimated £600,000 worth of vehicles and parts were recovered from inside several shipping containers.

They were joined by partner agencies, including Environmental Enforcement Officers from Thurrock Council, and officers remain on site as we continue to search more than 80 shipping containers.

Chief Inspector Richard Melton, District Commander for Thurrock, said: “We work very closely with our partners to build an informed picture of what’s believed to be going on in our local area.

“That’s why warrants like today are important – without reports from members of the public, our officers may not be able to act. Thank you for trusting us.”