Thurrock councillor honoured for his service to community during coronavirus crisis 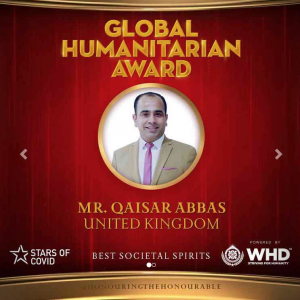 A THURROCK councillor has been honoured for his work in the borough community.

The shock waves from his killing promoted formation of the ‘World Humanitarian Drive’ (WHD) in a bid to link faith leaders, other charities, and governments across the world to promote peace through education, sport, art and media and instill humanistic values in communities, particularly among young people.

Cllr Abbas has been honoured for his work in Thurrock during the coronavirus lockdown, during which he has worked to help ease the pressures of isolation and has organised several ‘treats’ for local people including visits by the emergency services to mark birthdays and other special events.

The award ceremony was organised by WHD-to honour the individuals, organisations and community groups for their contribution during the COVID-19 crisis. More than 1,600 nominations from all the seven continents were received and 100 individuals, organisations and community groups from 35 different countries were presented with awards in 12 categories.

Ms Sara Wilson, Director of Global Operations WHD, announced Cllr Abbas’ award and said: “Your selfless contributions to humanity has set an example to many and inspired a lot in these times of hardships, giving the hope of sunshine through humanity.”

Cllr Abbas said: “I am honoured and humbled to receive this award. I thank my parents, friends and people of my area for their prayers and support.”

WHD Chairman and founder Abdul Syed added: “Actions speak louder than words. The Covid stars serve as the best example for this phrase. These stars got into action and are helping humanity to fight against the deadly Covid-19.”