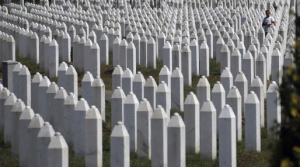 SREBRENICA Memorial Week sees communities across the UK commemorate the 25th anniversary of the genocide where over 8,000 Bosnian Muslim men and boys were murdered, simply because of their faith, on 11 July 1995.

Cllr Deb Huelin, Cabinet Member for Communities, said: “I would like to ask residents to reflect on the genocide and how their actions can have an impact on our communities. The theme for this year is every action matters and seeks to show how the action of one individual does matter, however small it may initially appear.

“We use this week, from Sunday 5 to Sunday 12 July, to honour the victims and survivors of genocide and pledge ourselves to creating a better, stronger, and more cohesive society. The lessons we learn from Srebrenica are that hatred and intolerance can flourish if left unchallenged. We know discrimination remains an issue today. We all have a responsibility to address this and Thurrock Council is determined to do so.

“This week we remember all of those who lost their lives in the Bosnian genocide and come together in combatting hatred in all its forms in hope that we can continue to create safer, welcoming communities for all.”